Our facility is equipped with the most powerful clinical grade Rife Therapy Machine in the world. Using specialized and proprietary software, our Rife Therapy Machine is able to target specific frequencies that other hand held units can not. Our Rife Machine uses Beam Ray and Master Oscillator Power Amplification to produce the most power Rife frequencies in the world. Built specifically for our clinic, our Rife Machine is capable of producing frequencies and effects that are not reproducible by other hand held or off the shelf units.

Rife Therapy uses resonant frequency treatments to affect microorganisms and other biological processes in the body. By studying different organisms and body cells under microscopy, researchers have been able to identify the resonant frequency of these different types of cells. In the case of harmful bacteria and viruses, these frequencies can then be used to kill the organisms inside the human body. While at the same time not harming or affecting any other cells or processes. The most successful treatments of Rife technology have been seen in cases of Lyme Disease. Lyme disease, also known as Lyme borreliosis, is a vector-borne disease caused by the Borrelia bacterium, which is spread by ticks in the genus Ixodes. The most common sign of infection is an expanding red rash, known as erythema migrans (EM), which appears at the site of the tick bite about a week afterwards. The rash is typically neither itchy nor painful. Approximately 70–80% of infected people develop a rash. Early diagnosis can be difficult. Other early symptoms may include fever, headaches and tiredness. If untreated, symptoms may include loss of the ability to move one or both sides of the face, joint pains, severe headaches with neck stiffness or heart palpitations. Months to years later repeated episodes of joint pain and swelling may occur. Occasionally shooting pains or tingling in the arms and legs may develop. Despite appropriate treatment, about 10 to 20% of those affected develop joint pains, memory problems and tiredness for at least six months. Some researchers believe that the bacteria that causes Lyme Disease will lay dormant in the muscle tissue of those infected, reemerging months or years later and causing recurrent and ongoing infections that are extremely hard to diagnose, causing a vast array of symptoms. Diagnosis of Post Treatment Lyme Disease Syndrome or Chronic Lyme Disease is often extremely hard to diagnose, although it is believed that a high percentage of those infected with Lyme Disease will go on to have these lingering or resurgent infections. It is with this condition that the Rife Therapy is said to have the most profound effect. Focusing on the resonant frequency of the bacteria Borrelia bacterium and destroying it in it’s dormant stage. Treating using Rife Therapy has helped thousands of people suffering from this condition all over the world.

Research has shown that Targeted Rife Therapy can also help to treatment parasite infections, viral infections, and affect physiological processes such as sleep, circulation, and many more.

It is important to note that any claims of curing cancer or even treating cancer with Rife Therapy are strictly prohibited by the FDA and other State Regulatory agencies. As such we do not treat, claim to treat, or see patients for cancer related treatment of any kind. That being said we believe it is important for patients to have access to information and resources regarding the history of Rife Therapy and its relationship to cancer. The original research that Dr. Rife claimed to have an effect on cancer has been lost. So only speculation and the reports of the day are left to try and derive what actually transpired. Most publications and online resources claim there is no evidence or research that shows rife therapy has any effect on cancer. However, In 2013 a Landmark study was performed using frequency therapy entitled “Targeted treatment of cancer with radiofrequency electromagnetic fields amplitude-modulated at tumor-specific frequencies” the authors listed their conclusions and stated: “In summary, our clinical results provide strong evidence that the intrabuccal administration of RF EMF amplitude-modulated at tumor-specific frequencies is safe and well-tolerated and may lead to long lasting therapeutic responses in patients with advanced cancer. Our in vitro experiments demonstrate that cancer cell proliferation can be targeted using tumor-specific modulation frequencies, which were identified in patients diagnosed with cancer. Tumor-specific modulation frequencies block the growth of cancer cells, modify gene expression, and disrupt the mitotic spindle (Figure 6). Studies are underway to dissect the biophysical mechanism leading cancer cells to respond to specific modulation frequencies identified in patients with a corresponding diagnosis of cancer but not to randomly selected or tumor-specific frequencies identified in other tumor types. Elucidation of this mechanism of action is likely to unveil novel pathways and targets.” This article clearly suggests that the use of such frequencies did indeed have an effect on tumor cells. The diagram referenced is listed below. This is being provided for purely research purposes and our facility or team is not stating either for or against its conclusion, and this paper is not being referenced to promote or validate frequency therapy for the treatment of cancer in any way. 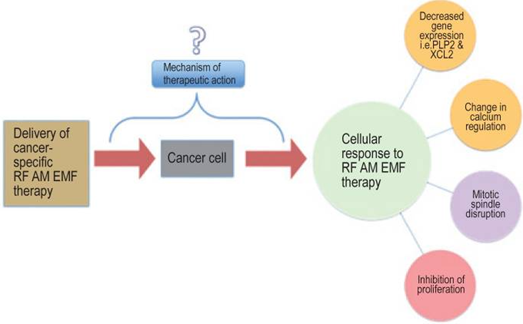 The article in it’s entirety can be found here:

Your Premier Provider for Rife Therapy in Westminster Denver Colorado!